Review the environmental cost of HS2

The HS2 rail link is currently the single biggest threat to our ancient woods and the preparation work for its first phase is underway. Government must review the true environmental cost of HS2.

You’ve probably heard of HS2, the new high speed rail link proposed between London and the North. I say “new” in the sense that it would be a completely new scheme – in reality it was first proposed a decade ago and has been in planning and design ever since. However, this autumn could see works on the ground finally starting, including the loss of irreplaceable ancient woodlands.

HS2 has been touted as a number of things: from the driver of the Northern powerhouse to the solution to rail capacity issues to getting you from London to Birmingham 20 minutes quicker. However, environmentalists and NGOs like the Woodland Trust see HS2 in a different light; a devastation of trees, wildlife and the wider natural environment.

Having campaigned against the environmental impact of this scheme for the Trust for several years now, I’ve become accustomed to seeing the statistic that HS2 will result in damage or loss to 108 ancient woods. This must seem like an eye-watering amount to a fresh pair of eyes.

I was recently afforded a fresh perspective of my own when I embarked on a trip to visit 30 of the ancient woods facing direct loss along the Phase 1 section (London to Birmingham). However, seeing and experiencing the special places that HS2 would cut through first hand wasn’t what I thought it would be. Seeing these ancient woods that have stood for centuries, and knowing that not only would it likely take just a few days for them to be felled, but also that the remaining habitat adjoining the tracks would be left to bear witness to a few fleeting seconds of roaring train every 5 minutes or so, was pretty depressing.

We often have people tell us “It doesn’t matter, these 108 ancient woods represent only a small percentage of the country’s ancient woodland sites…” In fact it’s a point that HS2 Ltd’s PR team has been keen to make on social media recently too.

But is it really necessary for me to get into percentages; we’re talking about the loss of irreplaceable habitats here. Of course it matters if we lose them. Whether it’s in South America or the UK, we cannot go on losing valuable woods and trees. It is no longer appropriate to justify the destructive environmental impact of a rail scheme when we’re in a state of climate and ecological emergency.

So what should be happening? Well firstly, the current Government review of HS2 lead by Douglas Oakervee must take into account the environmental costs of the scheme. Secondly, any works on the approved Phase 1 section that would involve ancient woodland clearances must be stopped until a go or no-go decision on HS2 has been made. The irreversible loss of ancient woodland cannot be allowed to happen if the scheme doesn’t end up going ahead anyway. That’s just common sense.

There’s so much more to say on HS2 but we have to take it battle by battle. If I’ve piqued your interest at all and you want to know more then please join 30,000 other people and take part in our campaign by sending a message to the government’s review team and the relevant ministers. 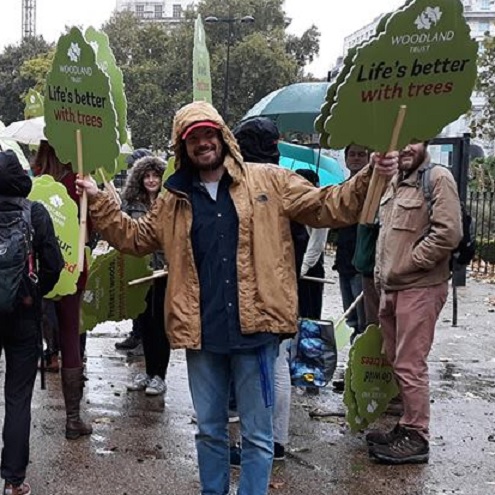