Richard Atkinson, Access and Environment Lead at British Canoeing, shares why they are working in partnership to survey, control and eradicate invasive non-native floating pennywort in our waterways.

British Canoeing, the Angling Trust and a number of other organisations, including the Environment Agency, have joined forces to engage, train and deploy a citizens army of volunteers for the surveillance, control and eradication of floating pennywort.

The plant is an invasive non-native water species that is a significant threat to our natural heritage. Its threat stems from its potential to spread rapidly and dominate built and natural waterways with dense mats of surface vegetation. These mats reduce biodiversity by outcompeting native aquatic flora and fauna and altering ecosystem function. This reduces access to recreational users of waterways, decreasing their amenity value and through erosion and deposition exacerbate the risk of flooding by interfering with flow.

Floating pennywort is a killer plant species and has the potential of covering sections of canal or whole lakes. It prevents light from getting into the water as well as deoxygenating it, resulting in killing anything living below its thick leafy matt below, including fish and our precious native plants.

The Environment Agency believes that by working together we can reduce this highly invasive plant’s impact and improve the water environment for both wildlife and people. This partnership has been piloted in the Thames and north west England catchments, making this project ready to be deployed in more areas. The project will work in parallel with the use of biological control, in the form of leaf munching weevils.

Through this project, the tide can be turned in combating this invasive species, restoring degraded natural environments and improving waterways resilience to external shocks including climate change, through improved biodiversity. Through engagement and training it will also connect local communities with their nearby blue space and build a legacy of skilled volunteers to tackle this species nationwide.

On 21st May, during INNS Week, the project managers will be working with a range of volunteers including paddling clubs and angling clubs, along with the National Trust and Environment Agency to clear an area of floating pennywort on the River Wey in Guildford. This is the second event we have held, with over 100 volunteers being present at the first one. We are hoping to mirror this on the 21st. Volunteers will be working from kayaks and canoes, as well as from the banks. My colleague Ben Francis has been working with volunteers, including individual paddlers and canoe clubs, the past year and has made lots of progress. You can read more about his work, here.

We are really keen to retain our precious native wildlife and clear our waterways of INNS. They have huge impacts, not only to aquatic animals and plants but a danger to larger mammals such as horse, sheep, cattle and deer who think these mats are safe to walk on!

The project has been going for under a year, but in the first six months we have achieved a huge amount. Carefully targeted rivers, such as the Mole, Wey and Colne, have attracted volunteers from all walks of life. New skills and lessons have been learnt on how to control INNS. This resulted in us receiving more funding to help educate the public in the form of animations and future videos.

The citizens' army is getting ready for action. 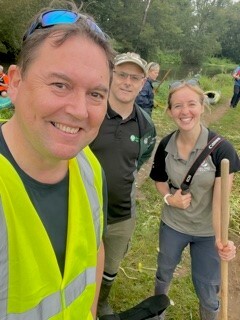