Paul Walton, Head of Habitats and Species at RSPB Scotland, explains why invasive non-native species are one of the top five drivers of biodiversity loss worldwide, and explores what action is needed to effectively manage this threat.

People are having such a profound impact on ecosystems and wildlife that the world is now facing a major ecological crisis.

Conservationists like me have been making pronouncements like that for years. Now, however, world leaders are beginning to share and reflect our growing understanding of our impacts on nature, and the intensifying concerns they generate. The United Nations oversees two major initiatives on the global nature crisis facing our planet: the Inter-governmental Panel on Biodiversity and Ecosystem Services (IPBES) gathers and collates humanity’s best scientific and cultural understanding on the living world and the threats it faces. The Convention on Biological Diversity (CBD) brings national and sub-national governments together in a shared mission to address the crisis.

These two key global initiatives agree that there are five fundamental drivers of biodiversity loss across the world: habitat degradation; climate change; pollution; over-exploitation; and the impact of invasive non-native species (INNS).

Invasive non-native species are animals or plants which have been moved from their native range and introduced to places where they do not occur naturally, directly through deliberate or accidental human actions; when established they generate negative environmental, social and/or economic impacts in those areas.

Why is moving animals, plants and fungi around the world and releasing them, such a problem? Can’t we just welcome the newcomers into the environment? Can’t we assume that nature will adapt and embrace novel species?

Unfortunately, we cannot. Unquestionably there are non-native species that have established and have not yet – as far as we can tell – had significant effects on local ecology. But many introduced species do have major, and often unpredictable, impacts.

This is because there is a fundamental ecological issue with moving species around the globe. The geographic barriers to species movement that exist on earth – the oceans between land masses, mountain ranges, deserts, sub-sea currents, even simple distances – make species and ecologies evolve independently in different regions of the world, adapting to local conditions and local species communities. This means, for example, that in Africa, antelope have come to fill the ‘plains grazers’ role – but in Australia, it is kangaroos. In South Asia, tigers are the big cats of the forests; but in South America, it is jaguars. This effect of ‘natural barriers’ leading to species distinctions runs right through the living world and it generates much of the biological diversity we see on Earth.

When people move species around the world and allow them to escape and establish, we effectively break down those natural barriers - and often damaging impacts emerge. Of course, species do sometimes move to new areas of their own accord. Even distant islands are eventually colonised by species from elsewhere. The human factor has, however accelerated things beyond all recognition, increasing rates of movement by many thousands of times and, moreover, generating species movements that would never have been able to occur naturally – for example, Eucalyptus trees from Australia are now highly invasive in Florida.

New species bring novel diseases and pathogens; unprecedented predation pressure; new competitors that impact natives in new ways; they increase the risk of wildfires; and alter native species through hybridisation. INNS impacts affect all major habitats and all major groups of animals and plants across the world – the UK is no exception. For example, our temperate rainforest, the precious yet fragmented climax habitat of our oceanic west coasts, has suffered massive degradation through invasion by Rhododendron bushes, escaped from gardens and now smothering the habitat and its unique wildlife communities. The effect is not only ecological. In 2010 the economic impact of INNS across the UK countries was estimated to be at least £1.8bn each year.

And the issue is getting worse – INNS movement, establishment and impacts are increasing at global, European and UK scales. Defra estimate that between 10 ands 20 new species are transported – often accidentally - by people and establish on the island of Britain every year. And species already known to be invasive are spreading rapidly: 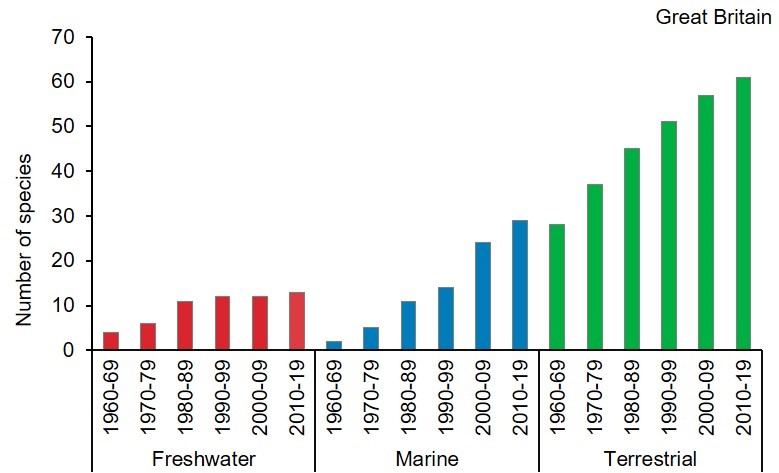 The UK Government/JNCC Biodiversity Indicator B6: Of 193 INNS established in GB and damaging biodiversity, the graph shows number of those species established in or along 10% or more of Great Britain’s land area or coastline, 1960 to 2019 [1].

International trade is the principal pathway for the movement of INNS world-wide. As the globalisation of trade proceeds and, in the UK, as we develop new trading relationships post-Brexit - with associated developments like Free Ports - an already severe and worsening ecological problem is set to intensify further. But we know from exemplars like New Zealand, that investment and implementation of simple biosecurity measures can effectively reduce the arrival and spread on new invasive species. The 2019 Environment Audit Committee’s inquiry into INNS concluded:

“While the Government’s GB-wide working and Non-Native Species Secretariat is highly regarded, its funding does not match the scale of the challenge. We recommend that its funding is significantly increased to at least £3 million a year.”

Invasive non-native species are one of the top five drivers of biodiversity loss and species extinction worldwide. If we’re serious about tackling INNS and the threats they pose, it’s vital that we increase investment in INNS management and biosecurity, and take action to raise awareness.

Paul Walton is Head of Habitats and Species at RSPB Scotland.