Healthy soil is the key factor that all of the aspects of sustainable food production depend on: carbon sequestration, biodiversity improvements and preservation of natural capital.

Nevertheless, in my opinion we should not be routinely paying farmers to maintain or enhance soil health. Rather, it should be a natural consequence of a sustainable agricultural system that, to use an analogy, maintains its ‘factory premises’ as well as its ‘production line’. Instead, we should pay to support genuine progress toward regenerative agricultural techniques across a whole farm, with a strong combination of taxation, regulation and incentives to tackle the big bête noire for soil health: excessive nitrogen.

Back in the real world, many farmers have allowed the soil to degrade to dangerous levels where ’the factory roof is in danger of collapsing and threatening the continued operation of the production line’. We obviously need to rapidly incentivise practices to reverse this soil health decline and protect future food supplies as well as working towards climate change and natural capital targets and aspirations.

Payments for carbon sequestration are being lauded as a method that can be used to reward farmers to raise soil organic matter and deliver a useful income stream to replace direct payments. As a soil health reward scheme however, this strategy is fraught with difficulties: firstly, there are problems with measuring and monitoring soil carbon levels; there are potential errors at sampling depending on time of the year, soil moisture, depth of sampling, and previous crop. Different lab testing methods also exist and can have quite different results for the same sample.

Secondly, payments for carbon sequestration will tend to discriminate against farmers who have already been striving to improve soil health by building soil organic matter levels. Once soils have accumulated a certain level of stable organic matter it becomes increasingly difficult to sequester more carbon as the soil reaches an equilibrium state where carbon is entering and leaving the soil. Farmers who have low organic matter soils due to poor previous management will therefore be able to attract greater payments to reward them for past sins!

Standard regenerative agricultural techniques such as direct drilling, cover cropping, diverse rotations and livestock integration are already incentivised in various countryside stewardship options which could all be rolled forward into similar ELM’s options.

These regenerative agriculture techniques are well proven and increasingly popular methods to improve soil health, but to move to the next level we need to start to drastically reduce nitrogen use. Nitrogen is the real elephant in the room when discussing soil health. Excess nitrogen use is responsible for ’burning up’ soil organic matter and releasing CO2 into the atmosphere through the action of soil microorganisms. It also releases harmful nitrous oxide into the atmosphere as well as nitrates into water supplies. Nitrogen is also the ‘lubricant’ that ‘oils the wheels’ of industrial agriculture. Its use in crop production to increase crop biomass and growth drives the need for other environmentally unfriendly inputs such as growth regulators, fungicides, herbicides and insecticides.

Actions to reduce nitrogen use in UK agriculture will help drive mainstream agriculture down a more sustainable, soil friendly path. Pesticide usage (with its attendant damaging effects on the soil ecosystem) will reduce, legumes in rotations will become more attractive, cover cropping to retain and recycle nitrogen and other nutrients that will be leached over winter will become even more indispensable, efficient storage and use of livestock manures would be encouraged as the organic nitrogen that they contain becomes much more valuable.

The incentive could be a carrot or a stick, or a combination of the two. A punitive tax or a nitrogen quota would do the trick as would a payment under ELM that rewarded low Nitrogen use.

Under nitrogen limitation regulations farmers who are already operating with healthy soils and high levels of organic nitrogen would suffer the smallest yield penalties and farmers with poorer degraded soils would be incentivised to build organic matter levels as quickly as they could.

To conclude: limiting nitrogen use has the potential to quickly and radically shift mainstream UK agriculture down a regenerative route and improve soil health without needing to resort to complicated, bureaucratic payment schemes. We need DEFRA to grasp the low hanging fruit.

Julian Gold is farm manager of 800 hectares of Hendred Estate in Oxfordshire. 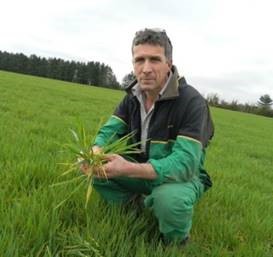